Premise is a word I’ve seen used by some excellent authors of ‘how to write fiction’ books, and at first I was a little confused by what they meant; until I realised they used the word ‘premise’ to mean different things.

Take Donald Maass’s fabulous book ‘Writing the Breakout Novel’. He dedicates the whole of chapter two to premise. For him premise describes the core ideas of the story. He says it must be plausible, original, contain an inherent conflict and have gut emotional appeal. He also says premise can be ‘built’.

Take for example the story premise of a boy who finds himself at a school for gifted children where, by solving a mystery, he defeats an evil criminal.

What’s exciting about that?

But by ‘growing’ the premise you could end up with the story of an orphan who discovers his parents were wizards and finds himself at a school for magic folk where, together with his new friends, he must break the rules so he can solve a mystery and defeat the evil criminal who murdered his parents.

Okay, so maybe it’s only plausible if you’re eight years old, but the second example is a lot more interesting than the first.

Before investing time and emotional energy writing a novel, it’s worth have a good hard look at the premise to see if it’s got enough going for it to make the grade.

In ‘How to Write Damn Good Fiction’ James N Frey views premise as an altogether different beast. For him it is the ‘nut’ of the story, the crux, the chisel with which to knock the entire novel into shape. He defines premise as ‘a statement of what happens to the characters as a result of the core conflict of the story’.

Frey’s definition of premise can be summarised as ‘X leads to Y’. For example: Friendship leads to success, or, courage leads to happiness.

He uses premise to help shape and structure a story. Take ‘friendship leads to success’. You could use this premise to prune out any scenes which did not fit with the idea – for example in the first Harry Potter book there are no scenes where Harry’s friends betray him or cause him harm.

Now I’m editing my novel, Cradlesnatch, I’ve found this idea of premise as a chisel particularly useful, especially as my first draft is overweight by about 20,000 words. I am plagued with doubts. What if the edits cut away all the good stuff? But once I’d figured out the premise was ‘Overcoming Fear leads to Freedom’ or ‘Succumbing to Fear leads to Captivity’ I found it easier to see where things should be headed so my story can shape up the way I want it. 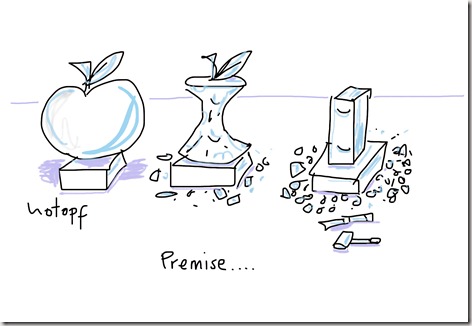 In fact, I found it so useful that I decided to create a premise for each main characters’ inner story, protagonist and antagonist alike.  These don’t conform to a strict ‘X leads to Y’ formula, but I’m finding them incredibly helpful to keep me on track.

A couple of examples are:

– You can’t always save everybody.

– Hoarded wealth is its own prison.

– Love is a choice not something you can force.

I’m not sure if these can strictly be called premises, but I don’t care so long as it works.

It seems to me that all these definitions of premise could be said to answer a single question: ‘What is the story about?’ but they do it in different and equally useful ways.

If you have enjoyed this post – you might like to see how I put my methods into practice in my other work by reading SNAP by Lizzie Hexter, available from Amazon.co.uk, Amazon.com, Amazon.ca, Amazon.com.au, iTunes and Kobo.

9 thoughts on “A Tale of Two Premises”